Steven Jonathan Glouberman was born in Montreal, Canada. His parents, David and Miriam, moved the family to Los Angeles in 1978, where Steve attended Emek Hebrew Academy and then YULA High School. It was at YULA where Steve’s passion for basketball blossomed, and he was a starting guard for both the J.V. and Varsity teams. Under his leadership, the Panthers went on to win several city championships.

Steve moved on from Panther to Bruin, attending UCLA, where he majored in Economics. He then went on to Loyola Law School, where he graduated at the top of his class.

It was at YULA where Steve met his future wife, Flora, to whom he was married for over 23 years. The high school sweethearts were blessed with three amazing children, Leah, Rachel, and Jeremy, who all inherited Steve’s athleticism, competitiveness, and good sportsmanship.

On any given Sunday you could find Steve at the park, coaching one or more of his kids’ sports teams. Jeremy, following in his dad’s footsteps, was a starting forward for the Shalhevet Firehawks, with Steve cheering him on from the bleachers.

True to his Canadian roots, Steve was also an avid hockey player, and was the captain of his synagogue’s ice hockey team, as well as its leading scorer. In addition to sports, Steve’s other hobbies included crossword puzzles, reading, and card games. But his greatest passion was his family. He loved taking them on vacations, whether it was jet-skiing at the beach or ice skiing in the snow – as long as they were together.

The epitaph on Steve’s stone reads “Love is all that matters”, an ideal that he lived every day, and continues to live on in everyone he loved. 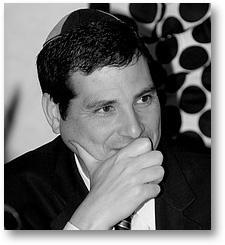